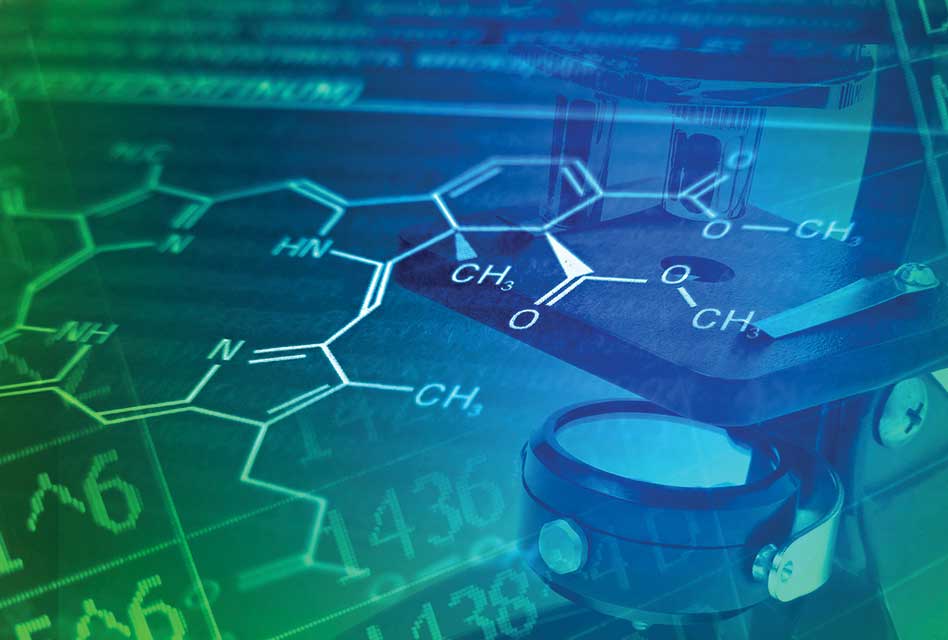 This article provides an overview of the cáncer situation in Cuba where mortality and incidence rates are increasing with an ageing population and changing lifestyles. Cuba has responded to these developments with a cáncer control national plan that seeks to make data from its cáncer registries the key to developing strengthened services to tackle the problem.

Cuba, an upper-middle-income country, is an island located in the Caribbean Sea with a population of 11.2 million inhabitants. Since the 1980s the life expectancy of the population has been increasing, reaching 78.45 years in 2014 (1) . Members of the population aged 60 years and over represented 11.9% of the whole population in 1990, which increased to 19% in 2014. According to projections, this proportion is expected to reach 29.9% by 2030 (2).

With the extension of life expectancy and the rapid growth of the population aged over 60, the potential for a large disease burden from cancer and other chronic diseases has likewise increased. Significant changes observed in lifestyle risk factors in Cuba are described by Bonet (3). Three comprehensive national risk factor surveys have been completed in Cuba in the last decade. There is a National Smoking Prevention and Control Programme (4, 5), in Cuba, nevertheless the results of this programme are far below what should be expected. According to the results of the third National Survey of Risk Factors (NSRF) a decrease in prevalence of smoking for males and females was observed in people over 15 years old. The percentage fell from 36.8% in 1995, to 32% in 2001 and 23.7% in 2010–2011. Current rates of daily tobacco use are 31% for males and 16.4% for females. The survey also showed an increase in the prevalence of obesity and physical inactivity, with a decreasing trend only among elderly people. Alcohol consumption is high, too. In 2015, 41.7% of Cubans drank alcohol and 67.4% of them had drunk in the last months.

One of the most important consequences of an ageing population and increasingly “unhealthy” lifestyles over the last few decades is the progressive and geometric increase in the number of people suffering from noncommunicable diseases (NCDs), and particularly cancer. 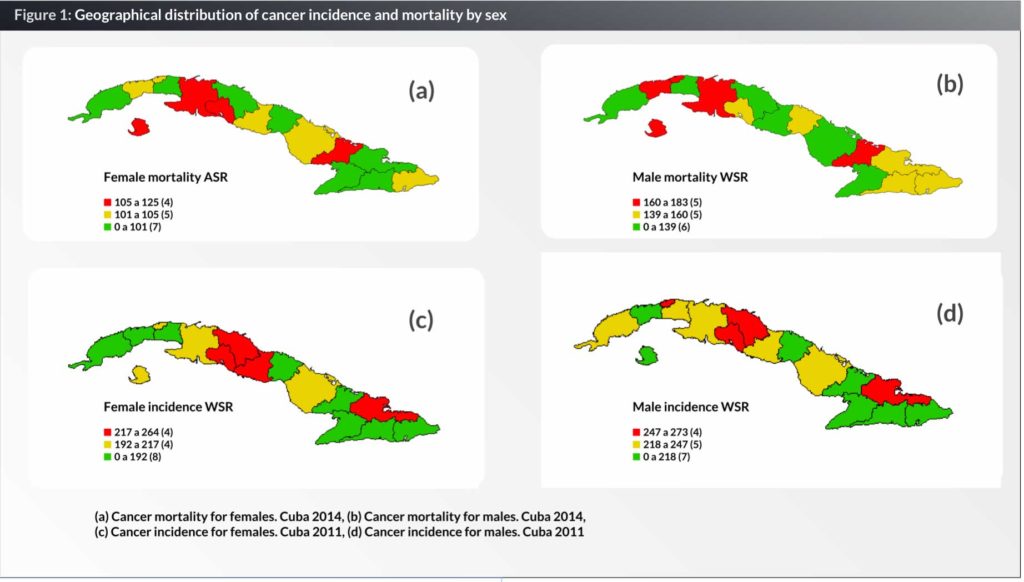 According to the last report from the National Cancer Registry (NCR) (8) the estimated numbers of new cancer cases in 2011 was 19,836 for males and 18,727 for females with age-adjusted rates using the world standard population (ASR-W) of 226.4 and 202.1, respectively. 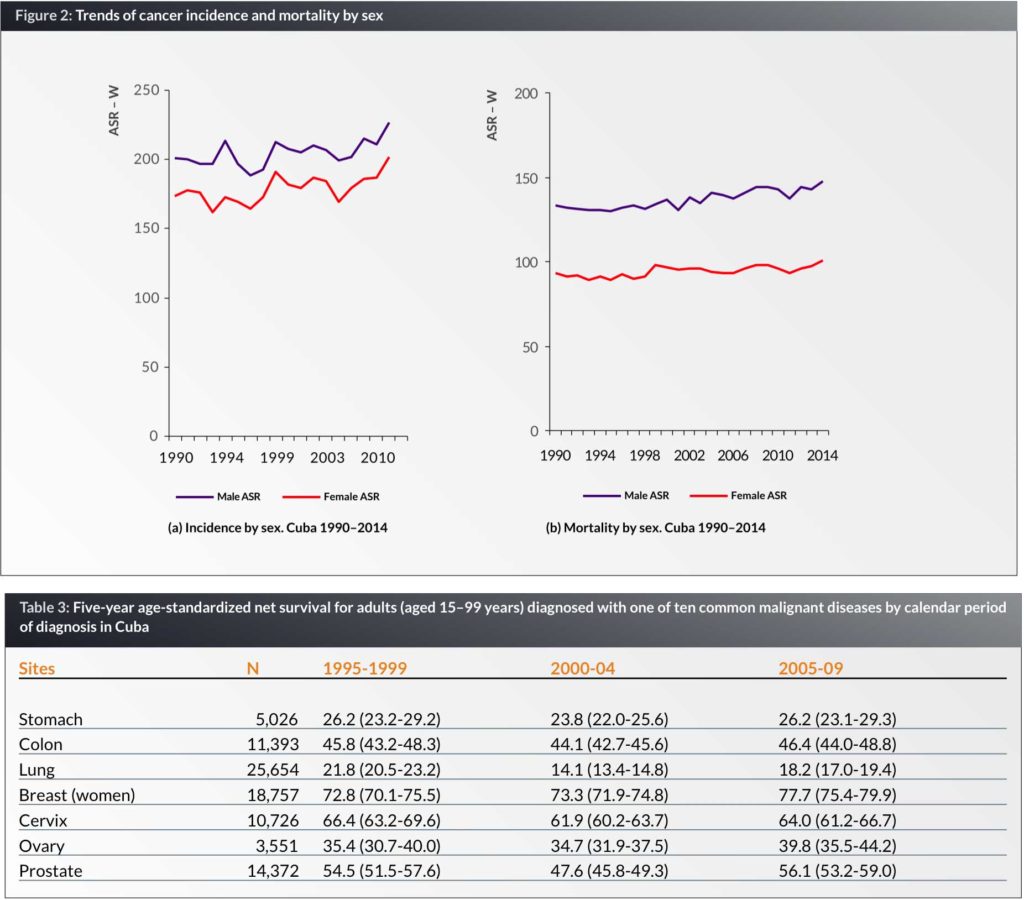 Among the population over 60 years of age cancer is the second cause of death. This age group contributes to 66.8% of all new cancer cases and 78.8 % of all cancer deaths. 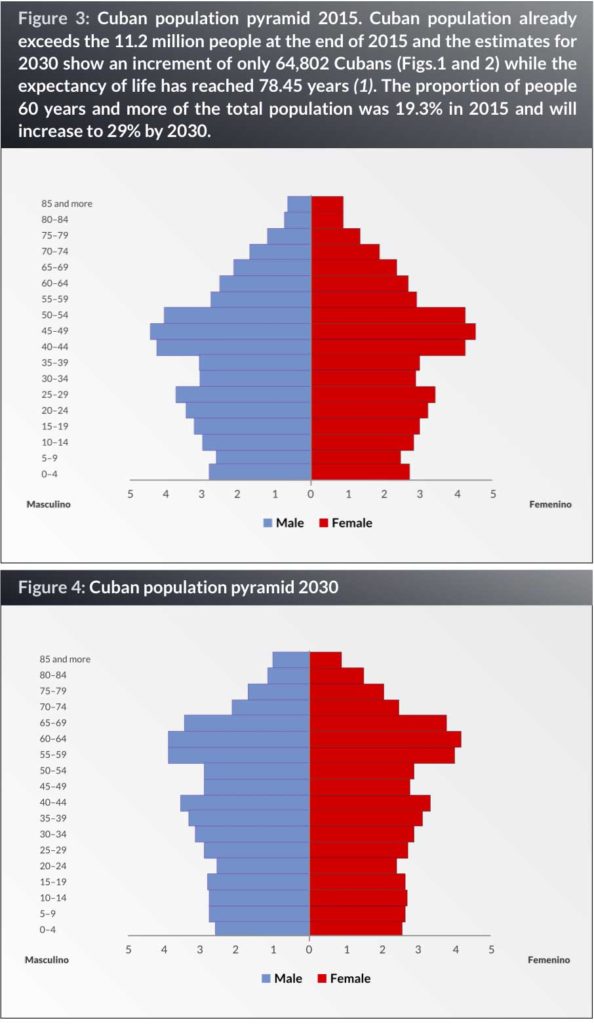 In Cuba, since the 1970s great efforts have been made in the centralization of childhood cancer management around the country. These efforts culminated in the creation in 1989 of the National Programme for Childhood Cancer Control, as a new stage in the development of cancer control (12). The aim is to concentrate resources and treatment in nine centres throughout the country, which permits a greater specialization of the entire team of medical personnel, and the application of the most updated treatments our economy allow. Yet, difficulties in terms of structure, equipment and availability of new generation medications can occasionally be found in some treatment centres.

Cuba participated in the international project CONCORD2 which described and explained international variations in cancer survival (13). The age-standardized 5-year net survivals from some sites are shown in Table 3. Of 117,883 patients eligible for inclusion in CONCORD2, 23.7% were excluded because their cancer was registered from a death certificate only and 0.3% were excluded for other reasons.  Finally, Cuba included 89,576 patients diagnosed in the calendar period 1998–2006 for lung, breast (female), cervix, ovary, prostate, colon and stomach cancers. Comparing different periods, 5-year net survival per selected cancer sites showed an increase for breast, ovarian and prostate cancers. Survival from cervical, stomach and colon cancers remained stable from 1995–1999 to 2005–2009. Lung cancer survival was low but similar to other geographical areas. In general, the results for Cuba were comparable to those for developed countries.

The Cuban National Cancer Registry (NCR) – a population-based information system for collecting, processing and analysing data on all patients diagnosed with cancer in the national territory – was created in 1964 and upgraded in 1986 to include mandatory reporting and improved data management systems (17, 18). The information system was decentralized in 1994 to each provincial level (19, 20). Since 2004, the network of the cancer registries began its work. The NCR was part of the national public health system’s cancer prevention and control strategy, introduced in 1987, as the National Cancer Control Programme (NCCP) with the aim of lowering cancer incidence and mortality, and increasing survival and quality of life (21, 22). The data collected has allowed the national and regional authorities to make appropriate decisions on how best  to invest the scarce resources in cancer control to prevent, diagnose, and treat cancer, particularly to plan and decide on an annual budget for oncology medicines, cancer care facilities development, and planning, procuring and allocating radiotherapy equipment among other activities.

During the years 2006–2008 (23), the NCCP was reorganized becoming the Comprehensive Cancer Control Programme (CCCP) as part of the transformation process for the Cuban health system.  The Cancer Control Section (SICC, its Spanish acronym), created in 2006, is responsible for the coordination of all cancer control actions including the NCR. This administrative structure reports to the Ministry of Public Health (MoPH) and has four working groups: cancer control, cancer registry, research & development and the knowledge network for cancer control. The main goals of the strategy is to reduce cancer incidence and mortality, as well as to improve cancer survival rates and quality of life for patients with malignant tumours by 2015 (24), using national and international experiences as standards for reference (25).

Conducted by the SICC, the process of reviewing the NCCP lasted from 2006 to 2009. In 2010, the new designed programme and national strategy for cancer control was fully established in the country as a platform to integrate cancer control actions throughout the National Health System (26, 27).

The strategy is organized through five axes namely: education/communication; early detection/primary health care; diagnosis and treatment/supportive care; and research/evaluation and is deeply integrated into one of the main programmes of the Cuban health system: the Family Doctor and Nurse Programme (28), and the network of hospital services for diagnosis and specialized treatment.

The CCCP has eight years of experience now, using new organizational approaches to achieve the paradigm shift in cancer control. The national network of comprehensive cancer care is organized according to different aspects, such as levels of complexity in care, specialized services, geographic regions, levels of activity and clinical sites.

Currently the CCCP is reviewing and evaluating the indicators of the programme at the national level in order to measure its progress according to the goals proposed for 2015. The analysis of the impact of cancer control actions and the trends in cancer incidence and mortality, the prevalence of relevant cancer risk factors will be crucial for establishing the  priorities in primary prevention, early detection including screening, diagnosis, treatment (including childhood cancer care in particular), palliative care and the research strategy.

From 2016 on, organizational changes in the network will be introduced to strength the capacity and responsibilities of five regional centres distributed along the island. These centres will be introducing and evaluating new technology for diagnosis and treatment. Other task assigned to these centres is to host training programmes for cancer care related specialists.

Another priority task is to enhance the capacity of population-based cancer registries in the provinces to monitor cancer care and the impact of any action implemented at that level including relevant data for assessing changes in clinical practice, such as stage of diagnosis which are essential for explaining shifts in incidence and survival. The next step is to strengthen the cancer registries at hospital level as a key to assessing the demand for cancer care services and to obtain specific information useful for policy and planning at that level.

Although population-based survival has been increased for some cancer sites the significant reduction of cancer incidence and mortality has not been achieved yet.  It is known that the burden of cancer in Cuba will increase, among other reasons for the ageing of our population, the still high prevalence of risk factors, the increasing tendency in incidence and the increased prevalence. It is expected that the current capacity of cancer care services will not be enough to meet the substantial demand for treatment, cure and care. Another problem associated is the area of cancer diagnosis and treatment cost. The MoPH of Cuba is facing a public-health challenge: reducing the large and rapidly increasing burden of cancer with scarce resources. Nevertheless, the challenging Cuban experience could be useful for resource-constrained settings. 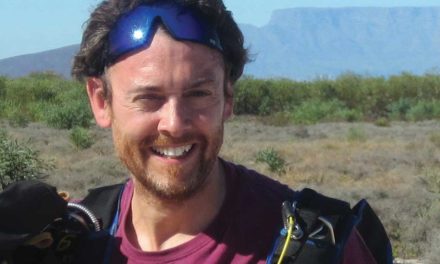 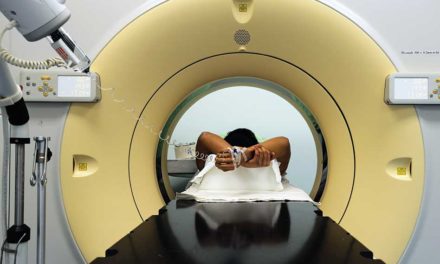 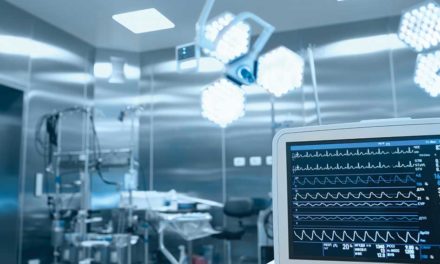